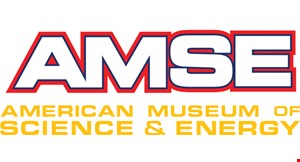 The museum opened in 1949 in an old wartime cafeteria. It was originally named the American Museum of Atomic Energy. Its guided tours took visitors through the peaceful uses of atomic energy. The present facility, opened in 1975, continues to provide the general public with energy information. The name of the museum was changed to the American Museum of Science and Energy (AMSE) in 1978.