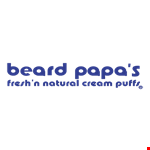 It's a bold claim to have the world's best cream puffs, but Beard Papa's makes this statement without apology. Their signature crunchy pastry is filled with a blend of Beard Papa's all-natural custard and whipped cream.

They're available in several memorable flavors, such as green tea, pumpkin and coffee-each one as satisfying as the next. Other delicious products include mochi ice cream, fondant au chocolate, and cheesecake sticks.

Known as the baker of the "World's Best Cream Puffs," Beard Papa's has been a household name since 1999 when they opened the first cream puff shop in Osaka, Japan pumping out this unique French choux dough puffs to happy people everywhere.

Since that time, their mission has remained unchanged - to pursue uncompromising quality in everything they do. By remaining steadfast in their quality commitment, Beard Papa's has spawned a devout following of loyalists who will attest that once you taste their cream puffs, you will agree, they are like no other.