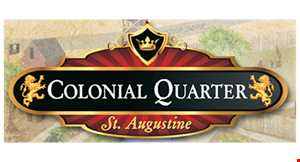 Venture if you dare into the 18th Century Garrison Town where St. Augustine is under fire and the Spanish are up in arms defending against the British and fighting for slaves' freedom. Be part of the adventure through the lives of those who supported the Castillo de San Marcos. The 14th Colony offers an intriguing window into life in St. Augustine under decades of British rule and during the American Revolution when the British launched invasions into rebellious Southern colonies.

Stroll the Flags Over St. Augustine boardwalk, each step a passage through the centuries beneath 11 of the very flags that have flown over this Ancient City for over 450 years-from the flag that likely flew on the mast of Juan Ponce de Leon's ship as he explored Florida's northeast coast to today's 50-star Stars & Stripes. Or check out the Colonial Crew Revue for a lively, fun-loving historic variety show for the whole family in our lantern-lit amphitheater under the trees, with complimentary refreshments.