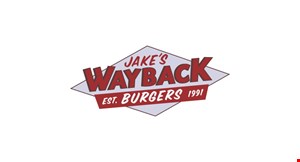 The thick burgers topped with your choice of fresh toppings are just the beginning at Jake's. Try a creamy, dreamy, hand-spun thick milkshake made from fresh milk and ice cream. For those looking to branch out beyond burgers, they also serve marinated chicken sandwiches, 100% beef franks, crispy salads, turkey burgers, crispy battered onion rings and classic house-made chips. Each month, wrap your hands around a new Burger of the Month, an exquisite departure from the norm. Jake's is proud to serve the best food in this or any other decade.

Wayback Burgers began in 1991 as Jake's Hamburgers with a single restaurant in Newark, DE which still occupies its original location on Route 273. Home to the University of Delaware, Newark is also known for its automotive plants (little known fact: reggae icon Bob Marley worked in one) and Main St. shopping district. A simple, unassuming "burger joint," Jake's soon became several stores and home to one of the region's favorite burgers. In August 2010, Jake's Hamburgers changed their name to Jake's Wayback Burgers.