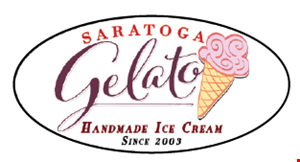 At Saratoga Gelato, your taste buds will go on an adventure to the streets of Italy! Their homemade Gelato is made fresh daily on site using imported flavors and fresh, all natural ingredients. Enjoy as much as you want in a cone or cup or get a pint, quart or 2 quart tub to-go! They also serve special gelato sundaes and gelato blended drinks like the Gelato Float or Cafe Gelato. They have a European style espresso bar with specialty coffee beverages and teas.

Saratoga Gelato is a family owned and operated business in Saratoga, NY. They offer authentic Italian gelato fresh made on site daily from Italian family recipes. They import Italian flavors and fresh, natural ingredient for a superior gelato. They also have a European style espresso bar with Lavazza espresso beans.