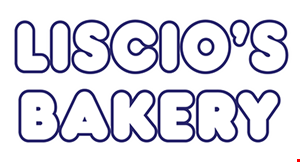 In April 2004, Liscio's Bakery moved to its new home. They spent a full year retrofitting this 40,000 sq. ft. facility with the best, most sophisticated and efficient equipment available in the world to produce its quality baked goods. Simultaneously with these events, they built a new store in Washington Township on Egg Harbor Road.

This newest retail location was also their first attempt at what is now a successful bakery and deli. With the success of adding a deli to their newest bakery location, the original Liscio's Bakery location at Cross Keys was given a facelift to include a deli as well. Both stores not only provide the public with bread, rolls and pastries, they now offer deli cuisine and a fine selection of the best Italian specialties. Liscio's Bakery continues to grow and expand and is now poised to handle expansion into new territories as well as satisfying its current ones with quality baked goods.

Liscio's Bakery was founded in January of 1994 by James Liscio. After working in the baking business for 14 years, James Liscio followed his dream of owning his own bakery. Liscio's original store is located on the Black Horse Pike in Sicklerville, NJ, in what has now become Liscio's Bakery & Deli of Cross Keys. Liscio's original customers still remember his grandmother, who was 84 at the time, sweeping the floor and chatting with all the customers.

Since that time, his grandmother and mother have passed on, leaving him a strong work ethic along with many great memories. Liscio's Bakery is still a family-run business and still strives every day for the same quality, consistency and enthusiasm that was used to bake the very first loaf of bread.