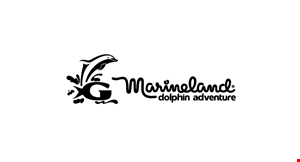 Founded in 1937 as Marine Studios, Marineland began as an underwater film studio. In 1938 it was opened to the public as the "Worlds First Oceanarium." Large porthole windows on the side of the Oceanarium gave many their first glimpse at the beauty and diversity of the ocean. Marineland pioneered dolphin training in the 1940's and the animals soon became the stars of elaborate performances where they exhibited aerial acrobatics. The ever growing popularity of dolphins, conservation, and education resulted in Marineland evolving from a show stadium environment to a new habitat that allows guests to meet dolphins up close. Today guests enjoy an educational experience swimming, touching, and even painting with dolphins.

Sold Out
Marineland Dolphin Adventure
$129 $64.50 50% off
[Sold Out] $64.50 For a Swim With The Dolphins Adventure (Reg. $129)
Sold Out
About Us
Shop by Category
Account Support
Join Local Flavor in Finding Missing Children